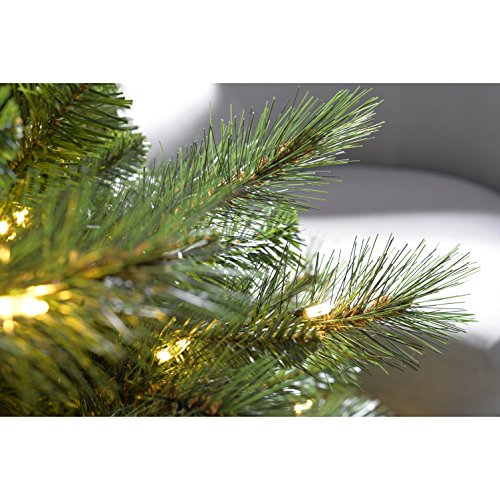 With the help of this article, within 10 minutes you will become an expert in artificial Christmas trees.

For the same color , height and type of tree , here are the three main reasons that artificial Christmas trees have different costs and qualities:

Before talking about the specifics of these 3 fundamental characteristics, which determine the price of the tree, here are a few words on the “typology” of fir trees. In fact, there are trees that are GREEN or other colors, SNOW (i.e. sprayed with snow) or FLOCKED, where the tree appears to be full of snow, as if it had been exposed to a large snowfall. Then there are trees that simulate the different fall colors of conifers, so not just green, but brown, or orange-yellow.

Tress come in STANDARD GROUND HEIGHT or with BRANCHES TO GROUND.

The FIN S trees have a diameter at the base slightly smaller than the traditional triangular shape, so while maintaining an excellent effect, with the same height, they are much less bulky. For this reason, they are more and more in demand because, although they are less realistic, they brilliantly solve space problems in rooms that are not too large.

Regarding the choice between the firs with foot in sight or those “branches to the ground”, it is only a question of personal taste: in the first case, the foot of the tree is visible, it is often quite ugly, and then will be covered and decorated with a special fabric or colored paper, but it has the great advantage that we can DROP THE GIFTS UNDER THE CHRISTMAS TREE.

If we instead choose a full-height fir tree, that is, with the branches down to the ground, then we will have solved the problem of the unsightly visible foot. We will have a less realistic tree, and we will be able to put gifts near the tree, but not under the tree.

So let’s come to the 3 fundamental characteristics we were talking about earlier:

traditional synthetic trees are made of PVC. A machine separates the branches, which are then assembled one by one. The realistic effect is not the best, and this is the main criticism leveled in recent years with synthetic trees compared to traditional ones: from a distance they can be pretty, but up close there is no photo. However, in recent years, fir trees with the branches molded in polyethylene have appeared on the market. These trees are EXTREMELY REALISTIC, practically identical to the real ones; it is therefore no coincidence that they are called FEEL REAL. Even to the touch, it will seem to you to touch a real fir tree: they have three-dimensional twigs, as well as needles, and they even sting a little, like the real ones.

As indicated on certain packaging, number of branches. In reality, this is always the TOTAL number of POINTS in the tree. This is very important for two reasons: the higher the number of tips, the fuller, denser and therefore more beautiful the tree. The denser it is, the more we can open it CORRECTLY. Even on websites, such as in shops, trees with few tips are often opened incorrectly, that is to say by opening all the tips of each branch as if they were the petals of a flower (FLOWER OPENING), so as to visually fill the holes left by the small number of branches. This produces a rather ugly effect, precisely because it is NOT REALISTIC! In nature, the branches of fir, larch and pine are fan-shaped. But if we open a tree in this way with few tips, we will have a stripped and disastrous effect.

With the branches which must be attached to the trunk one by one. Usually the different twigs have a different colored mark for each crown of branches so you can’t go wrong. As you can imagine, the assembly is long and laborious.
– with umbrella branches. In this case, the branches are already hooked to the trunk and you just have to open them one by one, but be careful: always starting from the bottom up!
– self-assembly: yes, you read that correctly. These are trees with umbrella branches, but with MEMORY SHAPE function, which maintains the given shape. Just take the tree out of the box, put it on its foot and voila, you’re done! A glance at the points to rectify them and in 5 minutes you will have your beautiful tree.
Assembly branch

Finally, there may be extra features to consider…

There are trees that already have the LED LAMPS inserted on each branch . It is not necessary to purchase the lights separately. No more wasting time untangling the thread, placing the garland around the tree and hiding it in the branches! Not to mention that today a good set of indoor LED lights (1000-1500 MULTICOLORED LED LIGHTS) costs no less than 60-80 euros. In this case, on the other hand, the tree is already equipped with electrical contacts inside the trunk, often divided into several parts to be mounted with a very simple “bayonet” system. So you just have to assemble the 2/3 parts of which the shaft is composed, plug in the power plug and that’s it!

There you have it, now you know everything, nd since you are now a super expert in the matter, all you have to do is choose the tree that best suits your needs and most importantly… your budget.

This website uses cookies to improve your experience while you navigate through the website. Out of these, the cookies that are categorized as necessary are stored on your browser as they are essential for the working of basic functionalities of the website. We also use third-party cookies that help us analyze and understand how you use this website. These cookies will be stored in your browser only with your consent. You also have the option to opt-out of these cookies. But opting out of some of these cookies may affect your browsing experience.
Necessary Always Enabled
Necessary cookies are absolutely essential for the website to function properly. This category only includes cookies that ensures basic functionalities and security features of the website. These cookies do not store any personal information.
Non-necessary
Any cookies that may not be particularly necessary for the website to function and is used specifically to collect user personal data via analytics, ads, other embedded contents are termed as non-necessary cookies. It is mandatory to procure user consent prior to running these cookies on your website.
SAVE & ACCEPT